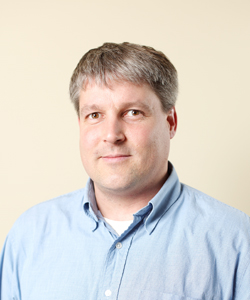 Dynamic compression of solids at continuum to microscopic length scales.

Dr. Turneaure’s work focuses on understanding changes in solids at both the continuum and lattice levels caused by impact loading. Completed work includes experiments on bulk amorphous alloys, which resulted in a continuum model for the elastic-plastic response of this material; x-ray diffraction on shocked solids at a synchrotron facility to gain insight into microstructural evolution during shock compression; the use of x-ray diffraction to determine the strength of shocked crystals; and x-ray diffraction on KCl to understand shock-induced solid-solid phase transformations.  Ongoing work emphasizes the importance of simultaneously obtaining both continuum data (velocity interferometry) and lattice level data (x-ray diffraction) to better understand the response of shocked solids; one such current project is focused on understanding inelastic deformation, strength and phase transformation in Si shock compressed along different crystallographic directions.

After receiving his B.S. in physics at Harvey Mudd College he joined Dr. Lemberger’s research group at Ohio State University. There he studied thin film superconductors in order to explore the effects of thermal fluctuations in suppressing superconducitivity.  In 2000, Stefan joined the Graduate Program in Acoustics at Pennsylvania State University where he worked in the field of physical acoustics with Dr. Keolian and designed, built, and characterized a thermoacoustic engine. Stefan joined the Institute for Shock Physics in 2002 where he now applies his experiences in both solid state physics and in acoustics to study shock compressed solids.