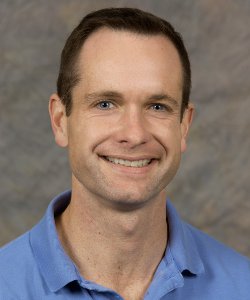 Professor and Chair, Department of Physics

Professor Matthew D. McCluskey has a broad research background in high-pressure and semiconductor physics. The primary focus is on materials that are important for optoelectronic applications, such as wide-bandgap semiconductors and organic crystals. Using diamond-anvil cells and low-temperature Fourier transform infrared spectroscopy, he has investigated the vibrational and structural properties of molecular solids and semiconductors under large static pressures. These studies have provided insight into the effect of pressure on the conformations, crystal structures, and vibrational interactions in a range of condensed-matter systems. To complement the static pressure work, Professor McCluskey pursues shock-compression experiments, as a member of WSU’s Institute for Shock Physics

Dr. McCluskey performed his research for his Ph.D. primarily at the Lawrence Berkeley National Laboratory, under Prof. Eugene Haller (Materials Science and Engineering). He studied the behavior of hydrogen vibrational modes under hydrostatic pressures using Fourier transform infrared (FTIR) spectroscopy and diamond-anvil cells. Dr. McCluskey then worked as a postdoctoral research associate at the Xerox Palo Alto Research Center (PARC), under Dr. Noble Johnson from 1997-1998. His research concentrated on the material properties of gallium nitride-based semiconductors. In 1998, he joined the Department of Physics at Washington State University as an Assistant Professor. In 2009, he was promoted to Professor